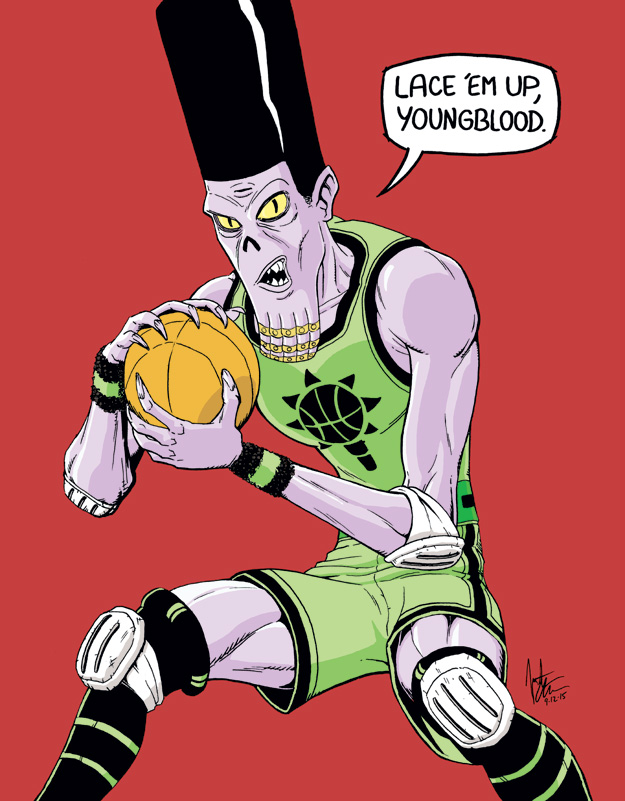 Was at my LCS the other week and an unsual looking book caught my eye – FANTASY SPORTS No 1 by Sam Bosma, published by Nobrow Press.  I’ve always enjoyed the look and feel of Nobrow books and checked it out.  Immediately enjoyed Sam’s art and kept flipping through it.  It was a tale of a magician explorer and her warrior partner encountering some sort of mummy king and they do battle through basketball!  Yes, that’s right, basketball!

If you know me, I love comics and I love basketball.  This comic was pretty much made for me.

I enjoyed the heck out of that book.  I thought it was super fun.  Halfway through, I knew I wanted to do some sort of fan art for it.  I decided to do an homage of the “mummy king” whose name was He Of The Giant Steps!  Specifially, wanted to homage the scene when you find out he wants to play basketball.  Such a GREAT scene hahaha!

Also, something I greatly appreciated was that the basketball scenes were clearly referenced and done by someone who can appreciate basketball competition.  Having someone as tall as He of the Giant Steps taking a much smaller adversary into the post just makes so much sense!  Loved the little nuances like that.  I highly recommend! Check it out: http://www.amazon.com/Fantasy-Sports-Sam-Bosma/dp/1907704809