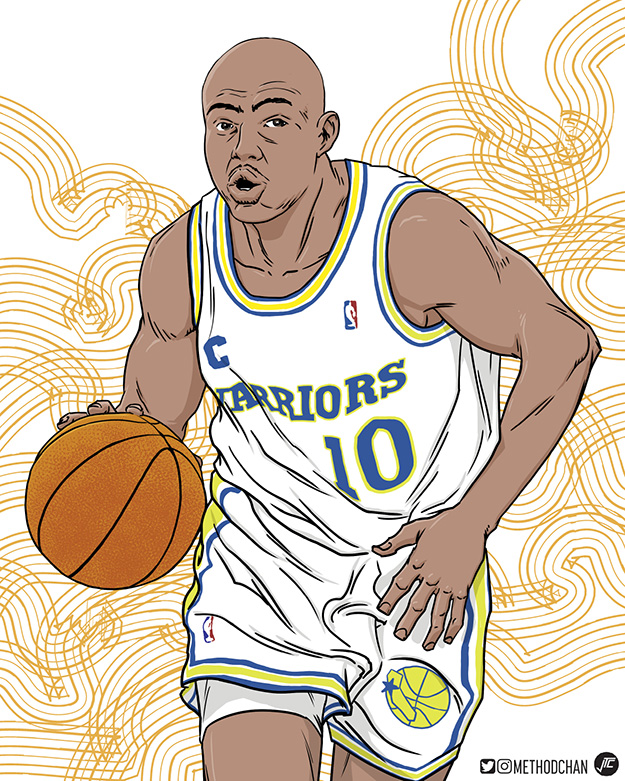 He presented the Warriors with this season’s Western Conference trophy, but back in his day, he presented a lot of excitement for DubNation and broken ankles for opponents! Today’s #WarriorsWednesday post is the master of the UTEP Two-Step – arguably the best crossover the NBA has ever seen – Tim Hardaway!

Tim was the 14th pick of the 1989 draft. He quickly brought excitement to the Ws, averaging 14.7 pts and 8.7 asts his rookie season. Combined with Chris Mullin and Mitch Richmond, the Warriors led the NBA in scoring with their up-tempo, run-and-gun style of offense. The Run TMC era was born! Tim went on to average over 20 pts and 9 asts for each of the next 4 seasons. He helped lead the Warriors to the 1991 playoffs, where the 7th seeded Warriors beat the 2nd seeded Spurs. As a Warrior, Tim was named an All-Star three straight seasons before a knee injury kept him out of the entire 1993-94 season. The Warriors traded him to the Miami Heat during the 1995-96 season, but not before Tim established himself as one of the franchise’s best point guards ever. Run TMC will forever be a DubNation favorite!

If you wanna see more cool Warriors art, come out to GOLDEN VISIONS: THE FINALS EDITION art show, presented by @solespace1 ! The show begins this Friday, June 7, for First Friday at Sole Space in Oakland (1714 Telegraph Ave) and goes through June 21. It’s a free event!