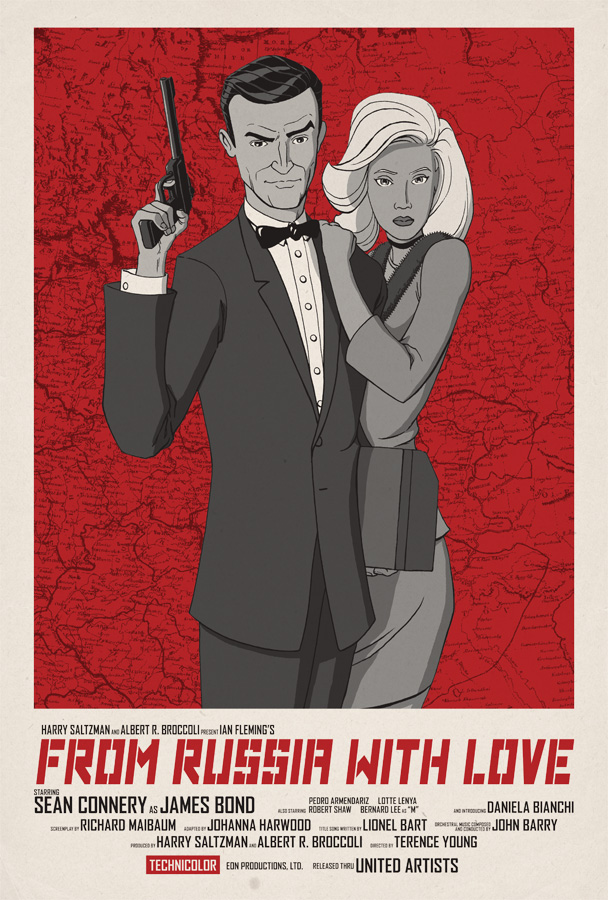 I entered into a James Bond art contest at the Super Punch blogsite. The contest was to create a Bond-themed piece of art — a movie poster, book jacket, piece of merchandise, etc. It doesn’t even have to actually be from an existing Bond property. Just Bond inspired. Sadly, I didn’t win, but had a good time putting something together.

I decided to do a mock movie poster of the classic Bond film, From Russia With Love. Thought I’d have fun trying to draw Sean Connery in the role he made so famous. I watched the movie (again) and was making a list of things I wanted to put into the poster, but due to some unplanned time constraints, I couldn’t draw everything that I wanted to.

For a moment, I was thinking I wasn’t going to get it done, but as my studio mate Vincent Kukua  pointed out, I needed to treat it like a real assignment and do whatever I could to make the deadline! So I reworked my game plan.

Looking at my James Bond Movie Posters book, I decided to do an homage poster to a series of teaser posters that came out for the movie. All of those posters had Bond in a tuxedo with a girl from the movie. The posters were all in grayscale with a red spot color behind the figures, in the logo, and in the technicolor box in the credits. I drew Bond with Tatiana Romanova, the Russian decoding machine (the Lektor) that he was after, and the Walther LP-53 pistol that was part of the iconic Bond look from the official movie poster. Her outfit is the one she was wearing while they were on the run on the train. I also decided to put a washed-out map of Russia behind them. In restrospect, I’m not entirely certain if that added or detracted from the homage poster…